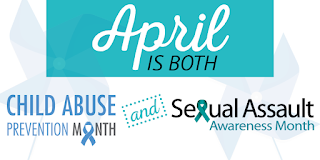 The other evening I was scrolling through instagram. I noticed one of the girls I followed posted April is sexual assault awareness month! It also is child abuse prevention month. Both of these subjects tug at my heart strings for several reasons.

So I would like to dedicate my April blogs to these subjects. In honor of all who have had their life changed by these horrific acts!

My heart aches for these survivors,because I have been where they have myself.

I would like to begin with probably one of the hardest subjects there is, well at least it was for me! Sexual molestation among children in families.

There are so many signs yet they can often be overlooked and not because your not a good parent! Because some of these signs can be chalked up as other things. Still as parents that is why it pays to have hard talks with our kids! Always know who they are spending time with! Not everyone who appears to be safe are!

Probably the biggest brushed off moment is a child who doesn't want to hugged by a relative they have been around multiple times! They may have even seemed comfortable with them before. Now though they all the sudden are terrified to be around them maybe even get mad and tell you they don't want to hug them! Never force your child to show affection to someone they seem unsure of!

Your child has went from being bubbly to totally withdrawn! They do not show interest in toys and playing. They have lost total interest of something they loved doing. A child doesn't just become withdrawn for no reason! Always ask questions and even if they say it's nothing. Keep prodding because kids don't just act this way for no reason.

A child that was just a normal kid that becomes angry and having horrible outburst! A child who seems to overly sexually facintated!

Look we all know kids are well kids! There is a difference in he let me see yours I will show you mine! Which I am totally not okay with! Than a child who all the sudden knows how their sexual parts works! Always ask how they came to know how things work! Who showed them or told them that's how their bodies are meant to be used.

Extreme fear and loss of confidence! A child who would have been okay to go to bathroom by themselves but now all the sudden need Mommy and no one else to go with them! Or a child who freaks out at bedtime and refuse to sleep by themselves.

A child who confident who now doubts themselves. Often think they are bad, ugly,unloved!

All kids go through seasons of changes in those awkward tween months for sure!

There is a difference in trying to find yourself than a fearful loss of confidence!

Now these are just some tell signs! Please listen to your Momma gut! It won't lead you wrong! If you think there is a reason to be concerned 9 times out of 10 your right to be!

So now that we know some things to look for what happens if your baby tells you that they have been abused?

First things first assure them they are safe! Most abusers threaten the victim! Normally they tell that they will kill someone they love dearly! Often they will bribe them as well! So another important thing is if someone is all the sudden buying your kid gifts and you feel weird about it! Start investigating! Go with your gut!

Take your child to the doctor for a physical! if your child has been sexually penetrated it could have hurt them! Also you want a medical record of this! Once you have identified the abuser! 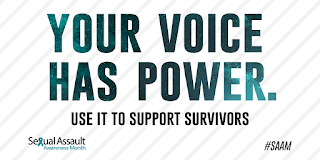 Get involved with therapy! Your child and yourself will need a safe place to talk about all the things that happened! Reassure your child it wasn't her fault! They did not do anything to cause it! The person who hurt them was sick!

1in 3 girls and 1 in 6 boys are sexually abused before their 18th birthday! It's not just females who get abused! Boys are often victims as well! Just as well women can be the abuser just as well as a male!

95% of the offenders is someone you know! So never let your child just go spend the night with someone! Always make sure you know them well and trust them and watch your child behavior around them!

3 to 8 year olds are the most likely age to exposed to sexual molestation! Please teach your kids it is not okay for anyone to touch them where a bathing suit covers them! Unless it is a doctor or their parent! No one else should ever touch them in any way! Teach them to know to come to you as soon as something like that would happen! Also teach them to tell you of any touch or words that make them uncomfortable! Teach them your their safe place and its okay to tell you anything!

Teach them it's not okay to keep secrets! That NO ONE should ask them to keep secrets from you unless it is a birthday surprise or Christmas present! Secrets lead to hiding things from you! Teach them you have surprises not secrets!

Again please prosecute! When we chose to be quite and sweep it under the rug! We are saying that I did something to cause this! I want to protect the abuser! That I am now giving them liberty to abuse again! Do not do this! Don't keep this a secret your voice and story may be the one thing, that helps someone else come forward!

The Bible speaks against harming His children. It is better to tie a millstone around your neck! Than to harm them!

Let's not hide or feel ashamed! Instead raise your voices and tell your story!
Don't let shame steal your healing! Because His blood made us all clean!

With Him all things are possible! If enough voices are raised it will raise awareness and stop abuse before it starts!

All children are worth fighting for!

For us survivors of abuse we know the importance of raising our voices! Bringing the dark into the light is exactly what Jesus would have us do!

Those who are truly wanting to raise the awareness to help stop abuse! Thank you so much! Because every voice raised is a child saved and a abuser stopped from hurting someone else's child!

All because of God I am able to walk in Footsteps of Grace and love!

I can not tell you thank you enough for stopping by and allowing me to share my heart and raise my voice! I pray you will stop by again soon!

Email ThisBlogThis!Share to TwitterShare to FacebookShare to Pinterest
Labels: awareness, From The Heart, Just a thought, mommy moment's 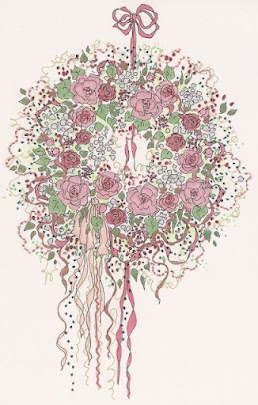